The heritage and scholar institution for Armenian studies in diaspora

The Nubar Library was founded in 1928 by the founder of the Armenian General Benevolent Union (AGBU) and former head of the Armenian National Delegation, Boghos Nubar Pasha, the son of a former Prime Minister of Egypt . From its beginning, the Library was located in a building erected by Boghos Nubar himself, and designed by the architect Levon Nafilyan, in square Alboni, in the 16th arrondissement of Paris.

The history of the Nubar Library cannot be dissociated from the figure of Aram Andonian, who also remained its first Director until his death in 1951. A celebrated journalist and author from Istanbul, Aram Andonian had been one of the few survivors among the leading Armenian intellectuals and notables arrested by the Ottoman authorities on 24 April 1915. He dedicated the rest of his life to documenting the Armenian genocide, by gathering a great number of materials into a major archive. Over the decades the Nubar Library’s collections were enriched thanks to the donations made by several Armenian politicians, intellectuals and bibliophiles of the Diaspora. Conceived as a home for Armenian and Oriental studies, in a context marked by the destruction and dispersal of the Armenians of the Ottoman Empire after the genocide, the Nubar Library has been assigned the role of preserving the memory and heritage of Ottoman Armenians. The Library, the sole major archive in Europe of its type, contributes to the shedding of light on the nineteenth and twentieth century Armenian experience and serves as a major hub providing unfettered access to researchers, academics and others. 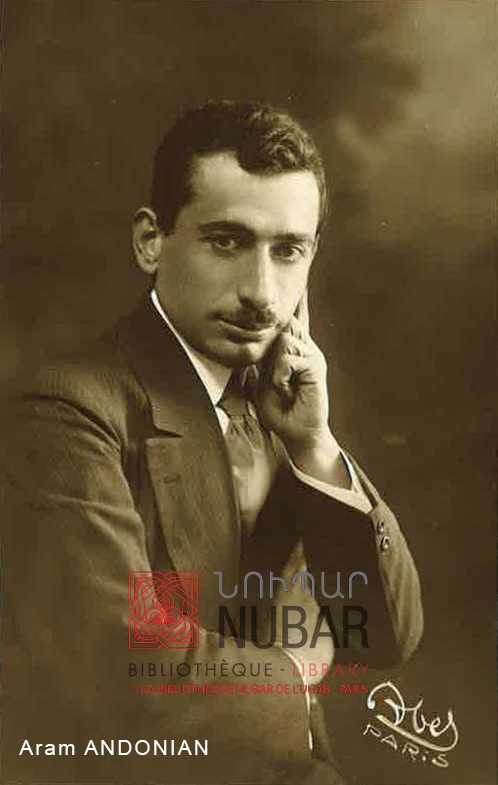